PART OF THE BOARDS FORMERLY KNOWN AS TJNR

This is where all the posts that appeared on the old front page (June '04 - January '05) are stored (back when the site was run using IPB Portal).
Post Reply
53 posts

yeah, it's fucked up. because the movie actually has a happy ending. but knowing what you already know from the beginning of the flick, well....

omg i love when the guys skin/bones are gradually coming off with the fire extinguisher!
Top

Irreversible employs a reverse chronological, but still linear, narrative arch. It's a narrative device that's not really the point. The tag line is "Time ruins everything" and that's the key to actually underdstanding what is actually a pretty obvious subtext.

The nauseated feelings people had were due to an underlying bass track Gasper used that is proven to make people puke combined with some extremely erratic camera movements in scenes that weren't visually tough to take and conversly a very stable camera when the scenes involved material that's tough to watch. It's a brilliant little movie but that doesn't mean it's not totally sick and depraved.

Las summer I dated a girl who looked like Emily Browning so I have a special place for her. Right on the end of my dick.
Top

lacey chabert, when will you get over your priveledged wasp suburban princess upbringing and just show us your shit in some crap softcore flick masquerading as 'art' in a desperate attempt to be taken seriously as an actress. alyssa milano did it in embrace of the vampire and it perfectly showed all of us the range of her talents. 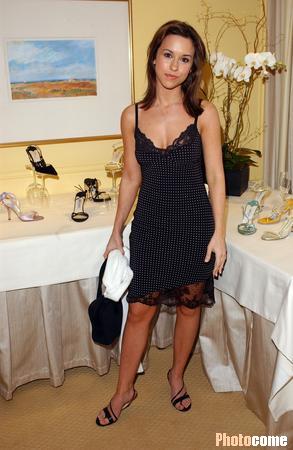 i got one word for monica bellucci fans.
malena.
imdb THAT.
Top

Thank you Justin, I have been waiting for Emily Browning pics.

Monica Bellucci is the only woman more than twice my age I wanna fuck really, really bad.
I need to get Irréversible and Malèna. :drool:
Top

kwanito wrote:...nikki cox and bobcat? holy fuck, he's must be filthy rich AND packing 3 feet of schlong. or she has a thing for his accent/speech impediment?


He has no speech impediment, it's an act. I remember seeing him on some sitcom where he played a lawyer who spoke completely normal when drunk, but was his classic "GAAHHH" when sober.

He apparently started doing it because, unlike his mediocre comedy, it was more likely to illicit a reaction from the crowd not to mention that it's kinda hard to forget.


GiantPeach wrote:I think Cox and Bobcat met and, presumably, fell for each other on the set of Happily Ever After. Not that you can blame him, but the show must've run just long enough for him to grow on her, I guess.

Nice pics! I am not feeling Emily. The other two are hot! I dont think that Monica is the hottest alive. Carmella Desores - sp? is way hotter then Monica.

As for Bob Cat, I dont really get it either. I guess it was his great sense of humor that won him over.
Top

Just in case it is accurate... according to Stuff magazine Nicki and Bobcat are only engaged.


Love is blind…or maybe it’s just her:
The 26–year–old Cox is engaged to her 42–year–old former Unhappily Ever After co–star Bobcat Goldthwait.

super ninja dog wrote:Thank you Justin, I have been waiting for Emily Browning pics.

seems like they've been engaged forever! thought they might've gotten hitched by now. i guess they're still engaged then. all the same though.
Top

you're right, the lemony snicket girl looked waaaaay better in the movie. in these she's got bad/too much makeup & that stupid nose ring looks like a zit.
Top

since he's such a catch, i bet nikki cox is in a HUGE hurry.
Top

sometimes i find myself staring at Justin's avatar instead of reading his post and the rest of the thread. i just close my laptop and go about my normal business. weird.

Users browsing this forum: No registered users and 7 guests